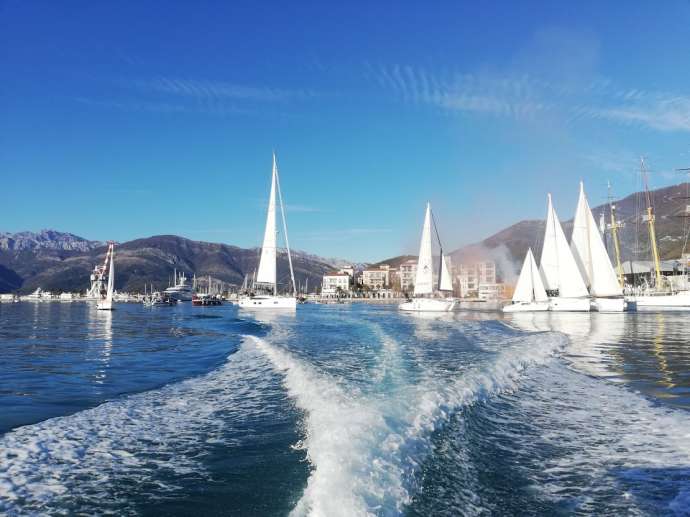 Is the development of Montenegro as a maritime and coastal country spontaneously or strategically planned? What is the maritime traffic pressure on the sensitive ecosystem of the Bay of Kotor? The year 2020 allows us to take a break. And to look at the relationship with the sea as the most crucial development resource of our country.

The most impressive users of the waters of the Bay of Kotor are certainly cruise ships, of which an increasing number have been coming in recent years. But there is also a vast number of yachts, sailboats, speedboats, motorboats, and jetskis. The construction of a seaplane port in Petrovići near Krašić has also been announced. Of course, sailors, rowers, divers, fishers- all of them count on Boka as well.

Is there room for everyone? How to respond to the wishes and needs of all stakeholders while preserving the sea and life in it? Integral planning, I guess. But we still do not have such plans on the horizon.

The year we will soon see off has brought vast changes in all fields. The negative economic impact of the crisis the COVID pandemic has brought us has affected almost all crucial spheres of the Montenegrin economy. But the absence of the tourist season, or maritime traffic reduced by more than 80 percent, delighted fish and crabs. Dr. Mirko Đurović, an expert on marine mammals from the Institute of Marine Biology, explains:

“Until 2020, we can freely say that there was a lot of pressure when it comes to maritime traffic, a large number of cruise ships, motorboats, yachts, speedboats, jetskis, everything we see during the summer. This year we did not have a tourist season. This was unfortunate, as a large part of the population survives on tourism, but in terms of the natural environment, this was a nice break, as far as the Bay of Kotor is concerned. I am sure that people have also noticed that the seawater is much more transparent, that the water is cleaner, visually, and we will see how things will go further. It will probably go back to normal when this whole corona situation is resolved.”

We must find a balance between economic interests and the need to protect the environment, is the message of a journalist specializing in reporting on the sea and maritime affairs, Siniša Luković:

“If we could see anything positive from this situation with COVID, it is that we had the opportunity to compare this year when there was almost no maritime traffic, during the summer months in the Bay of Kotor compared to what we had in previous years. And we saw how chaotic the situation was. It is obvious it a million ways, but we may see the best answer through the recovery of the marine biosphere and life in the sea in general. You have seen that much larger quantities of fish have returned, more marine mammals, that the sea is much cleaner, that the whole environment is healthier. Last year we had chaos in some respects, this year the complete opposite has been the case. We have to find some balance in between to work with each other.”

There are a large number of problems when it comes to maritime traffic in Boka, says the captain of the long voyage and naval pilot, Rajko Čavor:

“We do not have defined waterways, we are deprived of many other solutions that are implied in regulated maritime countries. I’ve been a pilot for twenty-something years. All this time, I have been trying to help us sit down and define rules that will apply once and for all. WIth the way we do it now, we currently have an unsettled situation at sea and general savagery.”

Let us ignore the incomprehensible fact that the Environmental Protection Agency does not have a sector, not even a single expert, that specifically deals with the sea as an environment. Žarko Lukšić from the Maritime Safety Administration explains which institutions are responsible and included in the system for the protection of the Boka waters:

“The Ministry of Transport and Maritime Affairs, the Ministry of Defense, and the Ministry of Interior formed a joint operational team, which united funds related to marine pollution and search and rescue at sea. A national emergency response plan has been developed. Its revision is in progress, and we expect that plan to be changed by the end of the year, to include the oil plants that are planned for next year.“

Regarding the legal regulations, besides national legislation, our country is a signatory to 15 international directives, conventions, and resolutions, among which the most important is the MARPOL Convention for the Protection of the Sea against Pollution from Ships.

In addition to the Maritime Safety Administration, the Ministry of Transport and Maritime Affairs also has the Port Authority, the Port Authorities of Kotor and Bar, and the Maritime Safety Inspectorate. As Luksic stated, the border police and the Ministry of Defense are included in the control system. However, only one navigation safety inspector is responsible for the entire area from Kotor to Jaz. Inspector Željko Lompar:

“When you look at the safety of navigation through the Bay of Kotor, which is our joint task, not only of the safety inspection but of all citizens, we can freely say that it is exceptional, although I am the only inspector involved. The situation is difficult. It is legally almost impossible to find a colleague. The competition remains open to any engine manager or naval captain who has a Faculty of Maritime sciences. The Safety and Navigation Inspectorate would be so happy to send such a person to carry out inspection work.”

Siniša Luković doesn’t agree with Inspector Lompar when it comes to the functionality of the maritime safety system. When asked whether the problem is in the legislation or the coordination of the competent institutions, Luković says:

“The problem lies in the legislation and the coordination of the competent institutions. I think that 25% is in the laws, and 75% is in poor coordination, or the unwillingness of the competent state bodies to do their job in the right way. For me, it is a startling fact that we do not have a networked information system between the Maritime Security Administration, the Maritime Border Police, the Harbor Master’s Office, and the Naval Inspection of the Navy (Montenegrin Army). All these institutions are wondering about everything that happens at sea. It is incomprehensible that there is no one information network where any of these bodies will, at any moment, know the situation in our coastal waters.

We are not talking about the waters of the Pacific. We are talking about some 100 kilometers of the Montenegrin coast and one of the most beautiful bays in the world. It is incomprehensible from that position that there is no single coordinated supervision over what is happening in our sea.

On the other hand, there is an unwillingness of certain state bodies to do their job the way they should. Why does the Ministry of Maritime Affairs and Traffic allow itself to systematize new positions in the Navigation Safety Inspectorate where the required education is structured so that it does not even necessitate a boat masters exam? Imagine a situation where you are at sea, controlled by someone who does not even have a boat masters exam, which you are obliged to have at any time you wish to go to sea with your boat? What are we talking about here? Is that a serious situation?”

One of the particular challenges in Boka is the control of the movement of vessels, for which not all the necessary infrastructure is yet in place.

“The Maritime Safety Administration has already taken measures to expand the monitoring of the Bay of Kotor through the IPA 2017 pre-accession assistance program. It is planned to procure and install the missing sensors that will cover the entire bay. These are funds that are not easy to provide; it is not easy to build a system. However, we have enough experience, the project is already underway, and we hope that at the beginning of 2022, the sensors will be in place,” emphasize Lukšić.

In Boka currently, not counting the marina Luštica Bay, there are four maritime border crossings. It means that yachts and boats do not have to seek free traffic just entering our territorial waters, which Žarko Lukšić explains as a requirement for the development of nautical tourism.

“As safety managers, we have to adapt to that. Three large marinas have been built, one is on the open sea (Luštica Bay), two are in the bay (Porto Montenegro and Porto Novi), and we certainly cannot influence that.”

Captain Čavor claims that we should set up the system better:

In neighboring Croatia, the system works differently. For example, yachts are not allowed to sail from Boka near Ponta Oštro and head to Dubrovnik. They must register at the entrance port of Cavtat and get free traffic. Why we do not regulate the situation similarly remains an open question.