From Solar-Powered Catamarans to Modern Sailing Vessels: The 12 Most Innovative Yachts on the High Seas 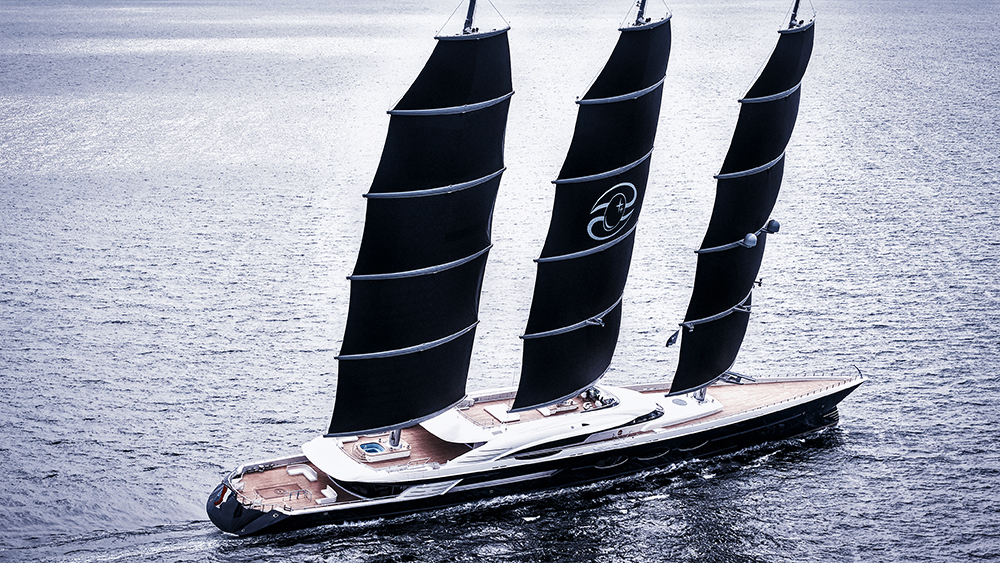 21 Jul From Solar-Powered Catamarans to Modern Sailing Vessels: The 12 Most Innovative Yachts on the High Seas

Yachts that make you look twice. That’s what our round-up of future-forward superyachts on the water today make us do. From aft decks dedicated to the ultimate helipad to silent hybrid cruisers, and even optical illusion design, it’s a rubbernecker’s paradise of top notch amenities and visionary thinking all rolled up into one dynamic yacht package. Whether you’re a salty sailor at heart or keen on speed machines, here we identify eight innovative vessels that will make you want to hop aboard without a second thought.

Everything about Moonrise is optimized for efficiency, from the sleek exterior lines penned by Studio De Voogt to a noise-reduced streamlined hull. The 328-foot yacht is Feadship’s largest build to date and, fittingly, she made a suitable splash when launched in February 2020. Vast interior spaces spread across eight decks are accentuated by high ceilings, flush decks and the sophisticated eye of interior designer Remi Tessier. An architectural use of glass drives the design forward, while quantum stabilizers and twin MTU engines propel the yacht through water. An exhaust gas treatment and heat recovery system go a long way to increase the boat’s sustainability factor, too.

When design simplicity meets cutting-edge technology, the result is 184-foot ketch Aquarius. Built for an owner who likes to race and explore in equal measure, the Royal Huisman sailing yacht shows how performance and classic design do not have to be mutually exclusive. Fast yet easy to sail, Aquarius has a ketch rig developed in collaboration by the yard, its sister company Rondal, and Dykstra Naval Architects. She pairs 9,843-square-feet of sails with the latest in navigational aids to be a world explorer. Classic teak decking and good seakeeping qualities make her a true sailor’s yacht.

The largest yacht built to date by Dutch shipyard Heesen, 262-foot Cosmos rewrites the rules of engineering. The owner’s brief requested fast and big, which led to an all-aluminum build to keep weight down and achieve speeds close to 30 knots, and a newly patented “Backbone” for strength and rigidity. Developed in partnership with Dutch hydrodynamicists Van Oossanen, Cosmos’ fast displacement platform is created using two long, flat metal plates that are joined together by a vertical plate in the middle. This prevents the hull from flexing in water. Four MTU engines will deliver 19,000-hp once the yacht delivers in 2021, and the addition of a fully-certified helipad means no place is off limits.

Olivia O is a yacht that means business. Robust in every way, she is owned by a commercial shipping magnate with a love for industrial boats. Built by Norwegian shipyard Ulstein Verft Olivia O’s rustic appeal is exemplified by the use of metal in the Espen Øino-designed interior, from windows with steel borders to corridors with painted metal ceilings. On water, she is defined by Ulstein’s trademarked X-Bow, which was originally designed for use on offshore vessels. Olivia O is the first yacht to ever feature it. Launched in 2020, she bridges the gap between luxury superyacht and authentic rugged explorer.

Scooping the top spot for largest DynaRig sailing yacht in the world, Black Pearl is designed by Nuvolari Lenard (assisted by Villate Design). A tri-deck sailing yacht, she boasts three revolutionary 70m DynaRig carbon masts and a sailing system designed by Dykstra Naval Architects. What’s more impressive is that all 2,900sqm of her black, highly distinctive sails can be set in a rapid seven minutes, and all at the push of a button. Her hybrid propulsion system, and other environmental onboard systems, such as waste heat recovery, propel her among a new generation of environmentally sustainable, and highly efficient vessels.

Launching at the Monaco Yacht Show this year, Bold is the epitome of pure industrial chic design. Built by Australian yard SilverYachts, and developed in collaboration with designer Espen Øino, Bold is the shipyard’s largest project to date. An all-aluminium cruiser Bold is the very vision of a fast world explorer vessel. The main deck aft has been designed as the ultimate helipad, with folding handrails and bulwarks to accommodate a helicopter with a D value of 13, such as an AW109. A 12-ton aft deck crane also allows the launch and retrieval of a vast array of tenders and toys. And a 3,000-litre heli-fuel storage tank means Bold’s adventure-driven owner can, and surely will, take this new generation hull platform to the ends of the Earth.

A 164-foot fast-displacement hull form with hybrid propulsion, Home was the world’s first yacht of her kind when launched in 2017. Pairing comfort with efficiency, and capable of silent cruising, she demonstrates the progressive capabilities of Dutch pioneering naval architects Van Oossanen, and Dutch shipbuilder Heesen Yachts. The iconic fast-displacement hull form provides superior efficiency, slicing through water with ease. When paired with Heesen’s hybrid propulsion and Home’s distinctive chiselled vertical bow, the result is a near silent, fuel-efficient cruising experience.

The mighty motor yacht Jubilee, built by Dutch shipyard Oceanco, has scooped multiple design accolades since her 2017 launch. For her Moscow-born exterior designer Igor Lobanov, she represents the need to always have faith in your own vision. Topping both length and volume records in the Netherlands at the time of her launch, Jubilee’s layered double decks—the very thing that originally put so many people off the concept—are, for Lobanov, the key to the yacht’s success. “When you’re travelling on a small tender it gives the scale of a bigger yacht, but as you get closer to Jubilee you realise her actual size. That’s what we wanted to achieve. We wanted it to be a design trick.” The illusion has been created with smoked glass panels between the decks that run the length of the superstructure and areas of teak decking inaccessible to guests, but which from a distance look like genuine deck spaces. Perfection.

Renowned for a truly striking exterior before she had even hit water, Artefact is the latest launch from German shipyard Nobiskrug. Designed by Gregory C Marshall, she boasts an extensive use of both structural and decorative glass, and includes a number of new technological and engineering features to minimise its environmental impact. These include a large battery storage system which allows the boat to operate without internal combustion engines for a limited time. The biggest-volume 262-foot superyacht in the world, she is also among the first superyachts to meet IMO Tier III emissions regulations and features an innovative diesel-electric propulsion system developed with electric motor manufacturer ABB.

A silent, solar-electric powered yacht, Silent-Yachts’ oceangoing catamaran can be yours for a cool 1.4 million Euros. With both propulsion and household powered by the sun (meaning no generators are required to run the lights, air conditioning, etc.), and with electric propulsion available when required, the 56-foot catamaran has unlimited range, no noise or fumes, minimal vibration and is virtually maintenance-free. It’s smooth and serene cruising at its best where both the environment and owner’s enjoyment come first.

Derived from the mind of starchitect Phillipe Starck in response to the owner’s brief for a “21st century pirate galleon,” SY A remains an undeniable talking point two years on from her 2017 launch. Love it or hate it, A is a vessel with innovation at its core. Technically a sail-assisted motor yacht, she is built by German shipyard Nobiskrug, and owned by Russian billionaire industrialist and philanthropist Andrey Melnichenko. Her free-standing carbon masts are the tallest yet built; her propulsion comes via a hybrid, variable speed powertrain; and she is said to feature an underwater viewing lounge nestled in her keel box.

Costing over $20 million to build when launched in 2012, the owner of this custom-built transatlantic trimaran—shipping magnate Antony Marden—has cruised the seven seas for seven years turning heads everywhere he goes. Adastra’s space age design comes from the boards of British studio Shuttleworth Design and was built in China by McConaghy Boats. Her speedy and light-weight hull is made from a super-strong e-glass/Kevlar foam sandwich, while her superstructure is made up of carbon fiber with a lightweight Nomex honeycomb core. Currently for sale, she provides the rare opportunity to own a yacht with “amazing seaworthiness” and looks like nothing else out there right now.

This story was originally published on September 3, 2019. It has been updated to reflect the most innovative vessels in production as of the current publish date.